Hi everyone,
A quick update ….. It has been manic with Horse Trials and now on with Summer Show then back to back with DTM. In Between all of this camp forms are being processed! Some of you will have received confirmation of deposits and for the ones that haven’t, it is on its way

Please could members who are coming to camp please let me have their club and membership number with their balance as this information is missing from a lot of the forms and I need it for insurance purposes.

Once the balance has been received you will get an update and camp information re ‘what you will need’, entertainment etc. Groups will be done shortly after the 18th and will be published. It will be taken that anyone not paying their balance has withdrawn and their place will be given to the next person on the ‘wait list’.

Sorry if it all sounds a bit strict but we have 80+ riders for senior camp and once all the paper work is done the pressure will calm down!

We are all looking forward to a good weeks riding at BB with a bit of socialising thrown in! So if you have any questions about any aspect of camp, please get I touch by e mail or call 07905692423.
If you have mailed me and not had a reply….please resend!

If anyone has any guests intending to visit and would like meals, please can you complete the Area 4 Camp 2016- Guest meals form.
Junior camp: can parents and any adults accompanying juniors, please can you use the same form.

This helps when ordering and paying for extra meals and also we will have a record of ‘non riding’ people on site for the H&S and risk assessment file.

Will try to keep the info coming…….theres not long to go….51 sleeps 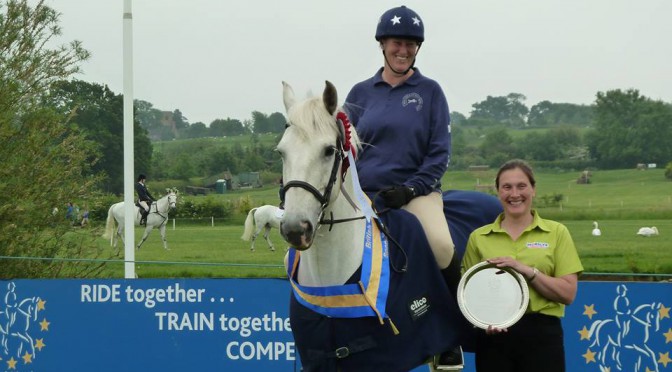 A win for Pat and Secret

I am a primary supply teacher in my early fifties and was thrilled to qualify for the Senior 90 Challenge Championship at Aston-le-Walls with my 14 year old mare Secret, an IDx I have owned for the last eleven years. She has always been a brilliant, clever jumper and she absolutely loves cross country so show crosses are her best events. Once I knew I had qualified I worked hard on improving her fitness and speed as she is not the fastest horse. The Sunday before the Championship I had a final practice competition, a showcross run by our local hunt, unfortunately Secret took exception to the second part of a double and slammed on the brakes, I flew off her and smashed into the very solid jump. To cap it all our horse box broke down on the way home. I thought the extent of my injuries was a badly bruised arm but by the Thursday my back had seized up and I was in immense pain. I was booked to have some cross country training at Epworth and had arranged a lift as the box was still at the garage. I managed to ride but the pain was extreme and I thought about pulling out of the Championship. Luckily, I got an emergency appointment at the chiropractors and she managed to relieve the pain and get me functional again.
On the day, I was last to go and had the advantage of watching a lot of the other competitors over the show jumps, which helped me make the choice about the route I would take (there were two alternative routes from fence 5 with the next six jumps mirrored across the arena). Secret is one of those clever horses (mares, I should say) that like to think for themselves and I am often just a passenger that she tolerates. I was worried that she would find the experience a bit overwhelming but she was very calm and went absolutely perfectly for me. She likes a flat course and firm ground, so everything was in our favour. She flew round the cross country, just steading up to trot through the water and over the bank. Even meeting another competitor coming back towards us on a narrow part of the course did not put her off her stride.
It was a complete surprise to learn that we had come first and I almost expected them to say they had made a mistake. I am so proud of my super mare and our achievement on behalf of Penistone and District Riding Club and Area 4. The Showcross was our first event since coming to Area 4, we look forward to many more!

Harewood were proud to represent Area 4 at the Championshiops and had a brilliant weekend at Aston le Walls on June 4th & 5th.

Three teams were competing over the weekend; 100 and 90 show cross teams on the Saturday then a combined training team on Sunday.

The Clubs job at the Championships was to help build the the show jumping courses for both the show cross and combined training so the 100 team who were first up on Saturday had already seen the somewhat challenging course that gave two route options from fence 6 to 11.

The afternoon saw the 90 show cross team in action and 4 fantastic performances in what was an even closer competition saw the team secure a brilliant 2nd place.  Kelly Lazenby took the lead from early on in the day and had an agonising wait until the very last competitor, another Area 4 member; Pat Haisman from Penniston and District Riding Club, who just piped her to top spot by 0.4 of a penalty. As to be expected of a championship the combined training proved to be another challenging competition. Team members were also the arena party on the day and had seen many competitors hopes dashed by the long, technical and twisting course, however all stepped up to the challenge and followed up solid dressage performances with good jumping rounds to secure 8th place.

Aston is a fantastic venue and everyone had a great time there.  The camaraderie and team sprit of team events can’t be beaten and everyone finishing in the rosettes was an added bonus. The long wait until the very end of the day at the FOTH championships was worthwhile for Judith and Legato II as it turned out to be a winning performance for the pair.

Legato is very sensitive and has a particular aversion to flags.  Knowing that there were plenty of flags at Aston Judith decided something needed to be done before the Championships so a selection of flags were purchased and put up in his field at home, much to his horror! Anyway, it seemed to do the trick as despite a breezy day and flapping flags he settled well to perform a super dressage test scoring 26.8.

The show jumping had caused a great deal of problems through out the day, with time also proving to be influential on the very twisty track, however an immaculate clear round secured the win in their arena.

The combined training competition also had an overall championship prize for the best result across all 6 dressage arenas and it was announced at prize giving that Judith had also won this.

It is my great pleasure to announce that the winner of the ROR Riding Club Challenge rosette at the recent Area 4 Horse Trials for the highest placed ROR is Audrey Braux riding Blue Avon for Malton riding club xxAudrey came 4th in her section in the 80 Senior class. Well done Audreyxxx A close second was Sharon Roche on Bollin Billy for Whitby who came 5th in the 80 Seniors and Third was Rachel Newton on Premier Ambition who came 6th. If anyone has recently got an ex racehorse and wants to win a rosette please send me your ROR number so i can add you to the points league

Hi everyone, shows coming up thick and fast.

Here is schedule for DTM plus Jorvic Medium and Pairs.  DTM_PAIRS_MED_JORVIC entry form 2016

Entry form for DTM too.

Please would you pass onto all involved yesterday at the Horse Trials.

I would like to say a massive thank you and well done to each and everyone of the members who volunteered and helped in any way to make the Horse Trials a success yesterday. It was a very long day but this made it possible for all who entered to compete.

There has been lots of positive feed back from the clubs and comments like ‘ all the stewards were very helpful and pleasant’ !

So again thank you because with out volunteers it would not be possible for your area competitions to run.

Congratulations to everyone who were successful at the horse trials yesterday. Here are the results RESULTS AREA 4 HT 2016 for website

Whether you went home with a rosette or not I hope you enjoyed your day.

Good luck to all our teams and individuals who will be making their way to the championships!

Just to let you all know that the course for the ODE next Sunday 19th June at Helen Bell’s, Breckenborough will be available for course walking (both SJ and XC) from 2-8pm on Saturday 18th June.

Wishing all your members the very best of luck for a safe and successful ride.

A few members have been emailing me the past few days with regard to which dressage test they will be riding next weekend.  Just to clarify:

All these tests are (2013) publications.

These tests can be found between pages 96-101 of the Rulebook.  link as follows: http://www.bhs.org.uk/enjoy-riding/british-riding-clubs/brc-rulebook

With such a HUGE amount of entries, please check YOUR OWN CLUB riders’ TIMES very carefully.  I have checked and double checked them, but I am only one person (and I am not Superwoman), if there are any problems/queries, please let me know AS SOON AS POSSIBLE.

The deadline for changes to these entries in terms of horse/rider changes need to be with me by TUESDAY 14th JUNE AT 5pm.  Any changes after that need to be completed on the “emergency changes form” (CHANGES FORM), which is for use ON THE DAY of the competition in case of any last minute changes. Don’t forget this needs to be completed in quadruplicate.

Also, please find attached “generic spare” declarations forms.  Generic Spare Declaration Form    You will have been sent these for your entries once you have registered your prelim entries with HQ.  Just in case you don’t have one, there are some spares available at the secretary’s desk on the day.  Alternatively, please complete the attached “generic” spare declarations form in advance of the competition (ONLY if you have don’t have the correct documentation from HQ).

Both these forms need to be completed in FULL and handed to the secretary’s desk AT LEAST 30 MINUTES before your first rider competes.

Good Luck to everyone and I look forward to seeing you all compete a week on Sunday,

If you have any queries before the day, please give me a call.

Please find attached the information and entry form for the forthcoming Area 4 Qualifier Summer Show on the weekend of 9th/10th July 2016 at Richmond Equestrian Centre: